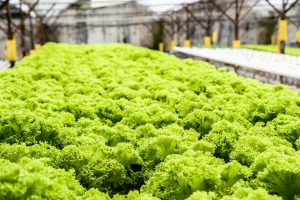 Growing plants without the medium of soil is gaining more and more traction with advanced technologies like aeroponics and hydroponics. The major advantage with these methods is the way in which plants can be grown in a controlled environment. This enables the cultivation of vegetables, fruits and leaves that would otherwise not grow in the natural environment of a particular region.

The basic principle of aeroponics is to grow plants suspended in a closed or semi-closed environment. While the plant’s foliage, known as canopy, extends above, the exposed roots and stems are sprayed with a nutrient-rich water solution. An ideal aeroponic environment is kept disease-free so that plants may grow healthier and faster than the ones that grow in a medium such as soil. In aeroponic farming, the root system is so sensitive that aeroponics is often combined with hydroponics, in which a back-up water and nutrition supply is assured if the aeroponic apparatus fails. In case of hydroponics, the plants are supported by an inert growing medium like cocopeat and are fed via a nutrient-rich water solution.

Plants grown through hydroponics and aeroponics have the advantage natural and unrestricted growth. This free growth also in turn reduces the incidence of disease. Because of the isolated nature of each plant, a diseased plant can be removed without affecting the rest of the system. And this disease-free environment allows plants to grow at a higher density as compared to traditionally cultivated crops. This system has enabled the cultivation of numerous plants that were previously considered difficult or impossible to grow from cuttings, as it becomes possible to propagate them from a single stem cutting. Aeroponics provides researchers with a non-invasive ways to study roots under development, while using a large number of experimental parameters to use in their work.

Evolution of aeroponic and hydroponic agriculture: A growing market

It was way back in 1966 that aeroponics first made its way out of the laboratory and into commercial farming.  In fact, in arid countries like Israel that use the technique extensively, they have even developed a patent for the apparatus used.

While this technology as such is more than half a century old, it is still evolving with time.  What makes hydroponic and aeroponic farming more relevant than ever is its application in a period of expanding cities and shrinking farmlands.  In countries like Singapore, there are entire indoor farms that run across massive buildings, where food is grown to meet the demand of the population. Along with this are also several technology start-ups working towards more efficient urban farming solutions. One of the best deals of this technology is that planters can eliminate the use of chemicals used in sowing, harvesting, packaging and storing.  They’re also able to cut down on the transport cost, as the food is grown close to the consumers, thus ensuring a steady and fresh supply.

Stories of people who practice them

For a closer look into what it’s actually like to be a practitioner of such a farming technique, let’s look at the story of Sachin and Shweta Darbarwar.  A software developer at a bank in Australia, Sachin and his wife Shweta decided to return to India.  After acquiring some training in hydroponic farming, they set themselves the goal of making available nutritious food which is free of chemicals and pesticides.  With this goal, they set up a farm called Simply Fresh, which cultivates exotic flowers, vegetables, fruits and leaves in almost two acres of land in the outskirts of Hyderabad, India, using the technique of hydroponic farming.   In a few years time, they have become the biggest and sole suppliers of exotic berries, salad veggies, salad leaves and edible flowers to almost all leading star hotels in Bengaluru, Chennai, Hyderabad and Mumbai.   Right from kale, to rocket leaves, romaine lettuce, iceberg lettuce and red leaf lettuce, they grow as if this is their home climate.  In the normal course, these are plants that would only grow in cold climates.

While there were no short cuts to the trial and error process that brought Sachin and Shweta to this stage, they can now vouch for their products to be so fresh and non-contaminated that they can be directly eaten from the packet.

According to Sachin, this method of farming is also a great way of conserving water, as it uses very little water compared to traditional farming.  Their farm is digitally controlled by bit data, which determines and detects climate conditions required for plants.  It then sets the micro climate inside the farm house to suit the needs of the plants.   Different cultivations are grouped together to optimize the use of the climatic condition created inside.  The walls of the greenhouse are made of sustainable paper.  Water passes through them to keep it cool and exhaust fans are used to regulate humidity.  All the plant beds are monitored, and also the amount of nutrition being provided.

Another start-up is the Bangalore-based farm called Farm Dimension, co-founded by Anjal Salam.  Their concept is somewhat different, as they are working towards developing indoor planters that look like mini-refrigerators.  These ‘planters’ can be used by people to grow clean food in a controlled environment.

What are all these entrepreneurs visualizing, really? “A world of urban farmers”, comes the answer.  By ‘appliancing’ agriculture, they say, it can help people in apartment complexes grow their own food.

If people can dedicate about two hours a day, they can produce clean food.  In fact, homemakers in large apartment complexes can get together to adopt these methods.  This can cut down water consumption by up to 90 per cent by re-circulating the water.

According to Salam, certified clean food might be a long way off, but branded fresh food is the way forward.  And once people are sensitized towards the concept of clean food, a lot of things will change”, he says.  It appears that hydroponics and aeroponics are very much here to stay.