Authenticity Markers for Paprika Chilli : How do we know where our spice comes from and its potency? 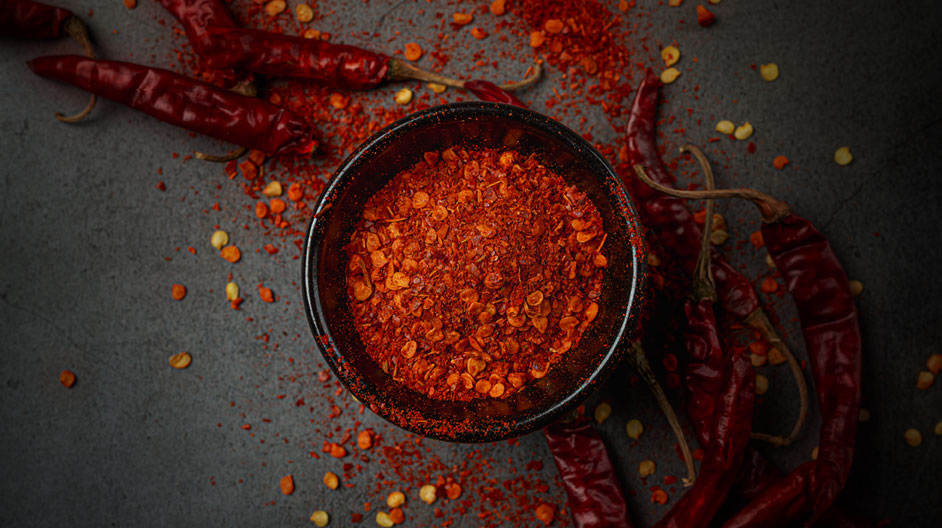 In the epoch of technology, where the world has become fast and small, foods remain as organic as ever before. Even though food technologies have made it possible to boost food growth, with the help of growth enhancers and the likes, it has also opened a leeway for adulteration, counterfeiting and food frauds leaving the value chain susceptible to recalls.

The peppers used in making paprika originate from North America, in particular Central Mexico, where they have been cultivated for centuries. Many varieties of Paprika are produced across Argentina, Mexico, Hungary, Serbia, Spain, Netherlands, China, and some regions of the United States. The Red peppers are usually air-dried before being processed into a powder.

Paprika is a chilli powder made from dried red peppers, which gives it its characteristic vibrant red color. It is often made from larger, sweeter peppers of the plant, Capsicum annuum, which includes bell peppers and many other peppers, though some hot varieties are made from hotter peppers and can include some seeds and pith. The chosen peppers are dried, sometimes smoked, then ground into a fine powder that can be used as a general seasoning in a variety of recipes. The different varieties of paprika are categories as sweet paprika, spicy or hot paprika, and smoked paprika.

Being the second-largest spice commodity produced and traded worldwide, it is one of the leading market commodities in European countries such as Hungary, Spain. Although initially belonging to the Americas, Paprika plants are quite adaptable and easily sown in tropical and temperate climates. They are grown in many parts of the world, and hence there exist several species of Paprika.

Some of the Paprika species

● Erősr – The hottest of Paprikas with a brownish tint

This makes quality testing of each lot crucial, especially when the food is Paprika Chilli, which must contain capsaicinoids and carotenoids like lutein, zeaxanthin, and meso-zeaxanthin. These are naturally found in chilli and are responsible for the quality and genuineness of the peppers. Capsaicinoids are the class of compounds present in capsicum (also called bell peppers). The most common Capsaicinoids are called Capsaicin, which plays a significant role in giving pepper the heat and stinginess you feel when you consume them.

Additionally, the pigments, photosynthetic bacteria, and algae present in the chilli plant are known as carotenoids. The bright red, yellow, or orange color of the plant or vegetable occurs due to Carotenoids’ presence; Carotenoids are of more than 600 types and can also be used as a type of antioxidant for humans. Some of the most common Carotenoids are Alpha-carotene, Beta carotene, Beta cryptoxanthin, Lutein, Zeaxanthin, Lycopene, to name a few.

The authenticity and quality of Paprika chilli are determined by measuring Capsaicinoids’ presence in the chilly (hot or spicy taste). Capsaicinoids are usually analysed by analytical techniques like gas chromatography and high-performance liquid chromatography (HPLC), which often prove to be impractical when mass testing is to be done. To carry out large scale testing of Paprika chilli, the colorimetric method is used.

Some producers also have in-house testing laboratories capable of checking pungency, total ash, ASTA color, crude fiber, light filth, moisture, aflatoxin, nonvolatile ether extract pesticide residues, microbial contaminants, or any other impurities. They implement stringent Quality Control benchmarks that Paprika Chilli should meet before selling it to retailers or wholesalers. The tests are usually done at the end of the production line after the harvest or at every stage of the growth process, starting from the raw materials.

Artificial intelligence plays a crucial role in eradicating quality issues by enabling active traceability right to the Paprika chilly’s root level. With AI-based technology, manufacturers and retailers can ensure that proper production and storage guidelines have been followed. Farmers can now keep a log for retailers and traders to inspect all the care taken to produce Paprika chilli. The AI technology has made the supply chain efficient and enabled retailers to plan and reckon when to order the next shipment. This results in efficient inventory management and slashes down food spoilage due to overstocking significantly. 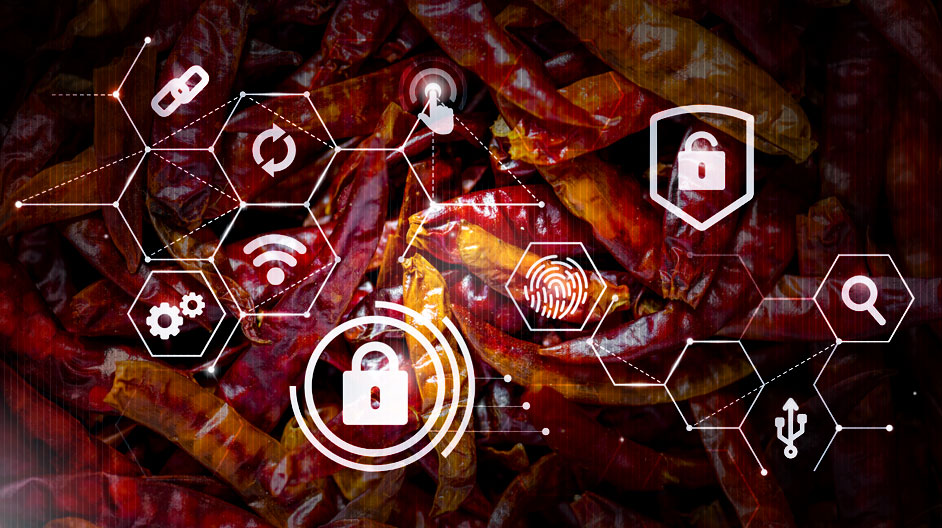 For instance, Covarrubias Farms and San Martin Enterprises in Arrey, New Mexico are popular chilli growers and own large processing plants. They distribute in the US to various customers such as distributors, food service industry, re-packers and major spice companies. Their Food Safety and Quality Control Departments are quite diligent to ensure that all processed and packed products meet Good Manufacturing Practices, HACCP, GFSI food safety based system and annually 3rd Party Audited under the PrimusGFS scheme.

High quality chilli products require superior traceability and food standards, like performing instant chilli recalls and audits both up and down the supply chain. Chilli inventory management is rendered easy and efficient with inventory bar-coding, stock-takes and multi-site management of chilli stores and inventory.

Using SCM it is possible to manage customer complaints such as customer feedback, photos, and resolutions can be provided quickly when a complaint is made. Trace complaints back to the supplier or your own block/crop/patch/batch.

While, MTR Foods, one of India’s largest consumer brands for spices and ready-to-eat food category has implemented a Farm to Factory Traceability of Byadgi Chilli with FPO in Dharwad district of Karnataka. They have a specific use case and benefits:

● No field level paper work due to data digitisation

● True data about farmers and their land holdings, Crops etc.

The European Chilli Pepper Market: the second-largest importer of Peppers

A report by the Center for the Promotion of Imports from Developing Countries, CBI, is the Chief Importer of dried peppers in Europe is Spain. “Europe is the second-largest importer of dried chilli peppers in the world – after Asia and ahead of the US–, accounting for 40% of all global imports,” the document details.

The hot peppers sector is expected to have a sustained 5 to 6% annual growth. Also, the prices that high quality and sustainably produced chilli peppers derive in the EU are better than in the Asian markets. In fact, in 2018 most Asian markets paid an average of 1.2 to 1.6 euros per kilo of that product while the average in Germany was 3.5 euros per kilo.

Spain is Europe’s largest importer of dried chilli peppers with purchases for 78 million euros in 2018, accounting for 24% of the total imports of the European block. Its purchases grew by 9% between 2014 and 2018.

France and Poland appear significantly keen as they imported 19.3 million euros and 14.4 million euros of dried peppers, respectively in 2018. 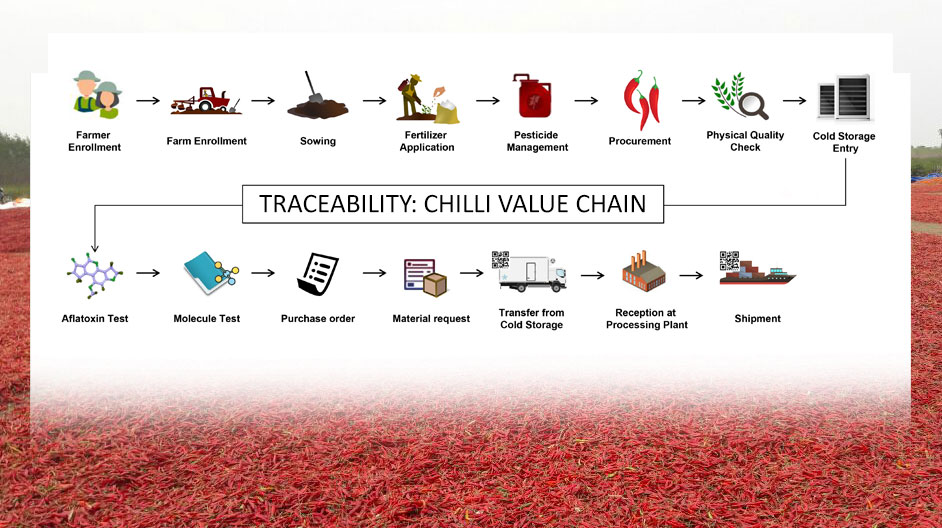 Traceability of chilli after harvest from farm to retail and overall supply chain management can also be a boon for the consumer as they know the history of the product they are about to buy. Consumers can know how a product was grown, which methods were used, where it was stored, under what conditions and the actual ‘best before’ date. Importers have also become strict with ingredient import, batch labelling and wish to leverage technology for food and food ingredients such as spices, whole or organic. Transparent food value chains will enrich the food network globally, improve personal health of consumers, impact and enhance a nation’s economy and prevent food frauds.