As Bright and Cheery as the Sunflower 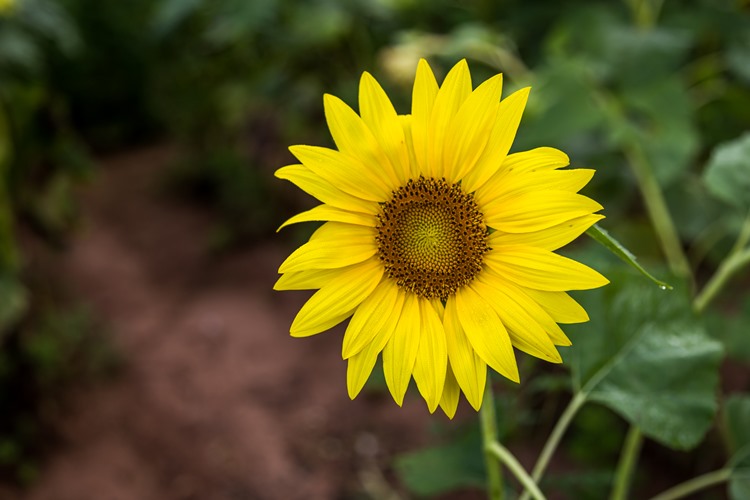 If you’ve ever passed by a sunflower field, you’ll agree it’s one of the cheeriest sights ever! The bright and cheerful sunflower, one of the most popular summer flowers, is also one of the most versatile of plants in the world. Little wonder then that they are a favourite with gardeners for ease of growing and low maintenance. It’s not that all sunflowers are yellow in colour- there are different varieties to choose from – with 60 different and extremely variable species ranging in assorted colours, sizes and forms. There are branched forms with small flower heads, which are common in the wild; as well as unbranched forms with massive flower heads, which are cultivated for their oily seeds, and still others with red or double flowers which are grown for ornamental value. The other colours- white and violet, aren’t as common though. The sunflower is propogated through seeds and is an annual plant that grows up to 1-4 feet when erect. Besides brightening up someone’s day, it is also a major cash crop! All parts of the plant, including seeds, stalks and petals are useful in some form or another.

Having originated in America, the Sunflower nearly travelled the world. After the discovery of America in 1492, the sunflower travelled to Europe in the 16th century, then onto Russia, before it returned to America. It so happens that all varieties cultivated today in America are Russian ones and the Russians have earned the reputation of being the greatest users of this plant.

Sunflowers have multiple uses in diverse sectors – as food, for its medicinal value and industrial use. Coming to its edible properties:

Sunflower seeds are edible. They can be eaten raw, cooked, roasted or dried. They’re a popular, nutritious snack containing a good amount of protein and vitamins. Traditionally, the North American Indians ground the seeds to make to make flour for cakes and breads. The petals are also edible – they can be cooked and eaten like artichokes. Sunflower seeds are a major ingredient in commercial birdseed.

The countries that produce sunflower seeds are the United States, China, India, South Africa, Russia, Turkey and Argentina. The first commercial production of sunflower oil began in 1830-40. The cold pressed sunflower oil is amber-coloured with a mild and pleasant taste and is abundant in vitamins A, D and E. Sunflower oil is used in salad dressings, for cooking and in manufacturing margarine. It’s known for its ability to withstand high cooking temperatures. Sunflower oil has a lot of health benefits too – as it has the perfect balance of monosaturated and polysaturated fats that makes it perfect for reducing the levels of bad cholesterol. This is the reason why more and more people are incorporating it in their diet. Sunflower oil also contains proteins, which are vital for building and repairing tissues and in the production of hormones and enzymes. Our bodies typically require high amounts of protein. Since the body does not store proteins, they have to be consumed; and sunflower oil fulfills this requirement. The oil is used in skincare too – due to its emollient properties that help the skin retain its moisture. Using it as a lotion on the skin of pre-term infants acts as a protective barrier and massaging with this oil is said to reduce possibility of skin infection by nearly 14 percent. So this can be used in daily skin care.

Coming to industrial use, it is used for making paints and cosmetics and to be added to soap, lubricants and candles. The flowers can be used to make an all-natural dye. The Chinese have used the fibre from stems for fabrics and paper. The pith (interior of the stalk) is one the lightest substances known and is used in scientific labs.

The roasted seeds make a coffee type drink. In countries where sunflower is cultivated, the seed cake that is left after the oil is extracted is given to livestock as food. In the former Soviet countries, the hulls are used to manufacturing ethyl alcohol, in lining for plywood and growing yeast. The dried stems have also been used for fuel. The stems contain phosphorous and potassium which can be composted and returned to soil as fertilizer.

The medicinal uses of sunflower have perhaps not been as popularized, and are yet vital uses. The greatest medicinal use of the sunflower known across the world is for pulmonary afflictions. It was the primary medicinal use of many Indians. The decoction made with sunflower head were drunk by the Indians for respiratory ailments like bronchitis, lung infections and pleurisy. The root of the plant is also used in traditional herbal medicine to treat snakebites and spider bites. The leaves can be made into tea to relieve fevers, lung ailments and diarrhea.

The plant’s ability to absorb water from soil has been used to reclaim mushy land in the Netherlands. The sunflower roots can remove radiation from soils and water – they were used to clean up the Chernobyl disaster. According to Botany Global Issues, sunflowers were grown on floating pieces of Styrofoam and placed over the contaminated water. The sunflower’s roots removed 95 percent of the radioactivity in 24 hours!

The sunflower is the only flower which moves with the sun throughout the day. Always facing the sun, it opens at sunrise and closes at sunset. A fully-grown flower also resembles the bright sun, the petals placed in a way that it resembles the sun rays. It is even said that sunflowers must be planted where the sun’s rays don’t reach. It helps to purify the air and remove the causative agents of malaria, joint pains and paralysis. Apart from all these uses, just add a few sunflowers to the next garden you plant and they will put a smile on your face…