Cheers! The Sun’s Down, What’s Brewing? 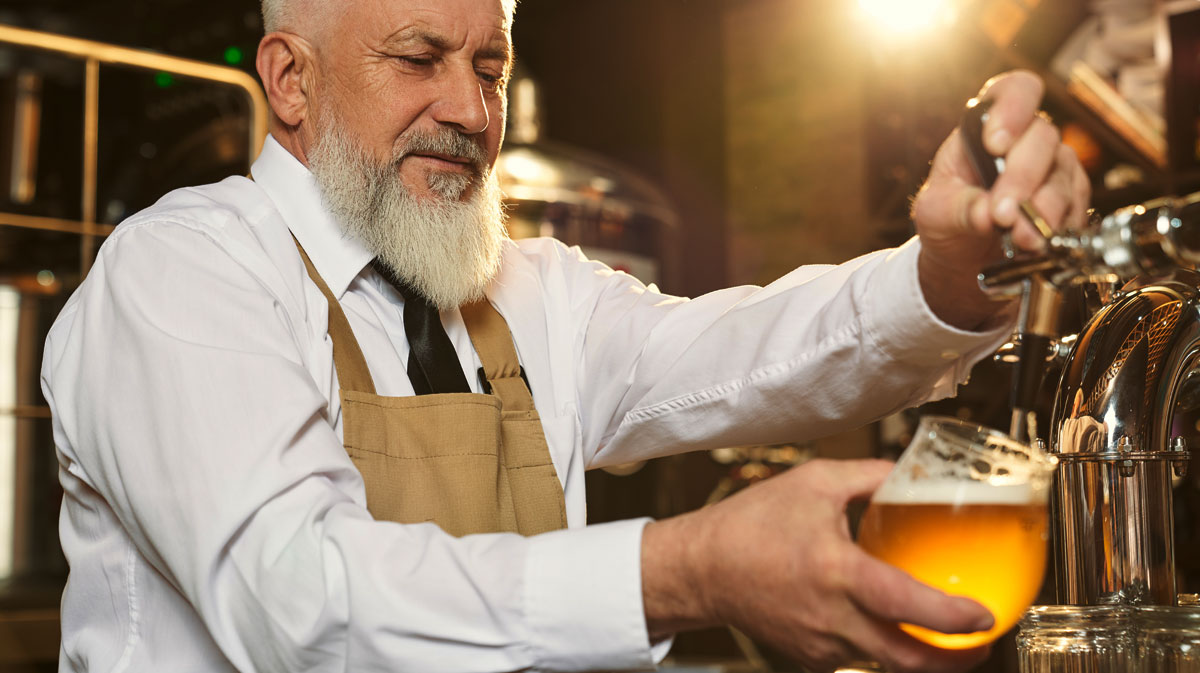 Having a freshly brewed beer is one of the most pleasurable experiences for anyone who has succumbed to the taste of finer things in life. The taste for this experience has led to the development of a whole new sub-industry in the Beer Industry. No points for guessing; it is the craft beer world. The huge farms of barley in the North American region are spread over thousands of acres. The malt distillers are their direct customers. In this article, we look at how malt and beer are being digitized using traceability software.

Defining craft beer becomes a challenge. However, a not-for-profit agency, the Brewers Association, has attempted to define a craft beer brewer as a small, independent brewer, unlike a large corporation. Today, 98% of all breweries in the US fall in this category.

A popular choice in beverages today, beer is the most consumed beverage in most countries. Yet, the can of chilled beer has been occupying the minds of the people working in food traceability for some time now.

You may be wondering, how can Beer fall under food traceability laws?

Well, the good news is that the Government of Canada and the Canadian Food Inspection Agency have now declared that ‘beer is food’. As per the new regulations enacted on January 15, 2019, any product containing 0.5% or more alcohol per volume will need to have traceability in place.

FDA has also included breweries under the food category requiring them to maintain records of the entire supply and production chain. This includes tracking the raw materials involved like malt, hops, and adjuncts from the moment of delivery to processing centers to final product dispatch.

Need For Food Traceability In Beer, Wine, And Other Spirits

Now that we have established that alcoholic beverages come from farm produce (barley, soy, grapes, wheat, maple and more) with some additional ingredients such as yeast and hops (flavoring agent), it goes to say all the risks associated with food products are valid here.

Product recall facilitation, quality control, stopping the rise of counterfeit products, and standardization are some of the reasons why Government agencies and companies are investing in food traceability solutions. As a mandatory compliance, the FSMA requires breweries to be able to demonstrate their systems to trace raw materials (malt, hops, adjuncts) from initial delivery from the grower to the distillery to further when they are transformed into finished goods and finally delivered to customers in cans or bottles.

Most breweries follow a batch-lot manufacturing process and are hence equipped to implement some basic traceability solutions. They can trace the farmer for each lot, however, they cannot accurately confirm if the batch of malt is from one single farm barley or more. Mixing of the barley crop varieties is a common industry practice.

Tracing The “Essential” Ingredients In Your Favorite Lager

Beer manufacturing, or brewing as it is called, is a process where the starch source is converted into the wort, a sugary liquid, before being fermented into an alcoholic drink.

Beer constitutes a starch source such as malted barley, wheat, maize, and rice; brewer’s yeast, and a flavoring agent. Some beer’s are also made from potato, millet, cassava, and agave in different parts of the world.

While the spirit industry can borrow the techniques of food traceability from the agricultural industry, the tricky part is tracking yeast and hops that give the product the real flavor.

Companies are employing real-time tracking for the entire inventory right from grain to keg, including tracking yeast genealogy. This helps them connect the yeast with the right batch and facilitates easier product recall, in case of any quality concerns.

Many breweries and processing centers are also employing blockchain to track the beer, from the farm to the distillation plant and further to the sales channel. Blockchain ensures that manufacturers have a large repository of data to work with, identifying the batch number of each ingredient and matching it with the right lot.

One such example is of a beer brand named – ‘Bock Chain’, a german strong rounded lager which is tracing grain ingredients from field to can. They produce a mixed malt from barley and hops procured from Canadian farms. They have a varied degree of roasted grains malted, brewed and distilled, tracking each production event with blockchain to deliver a new and engaging consumer experience. Blockchain technology is giving consumers greater visibility and transparency over how their food is processed, where it comes from what it has been in contact with.

How Does Blockchain Beer Work?

Customers have to scan the QR code on a can with a phone camera and they are able to verify the product and gather other details, including ingredients, tasting notes, calories, packaging information, carbon footprint, and even the particular batch of your favorite beer, brewed. Simultaneously, food producers benefit by having a secure way to record the real-time activity of ingredients, raw and finished goods. It also possibly prevents fraud by QR coding on the bulk cases so that no third-party, in the process can crack them open and remove or replace anything.

Use of IoT and Blockchain PROCESS FLOW 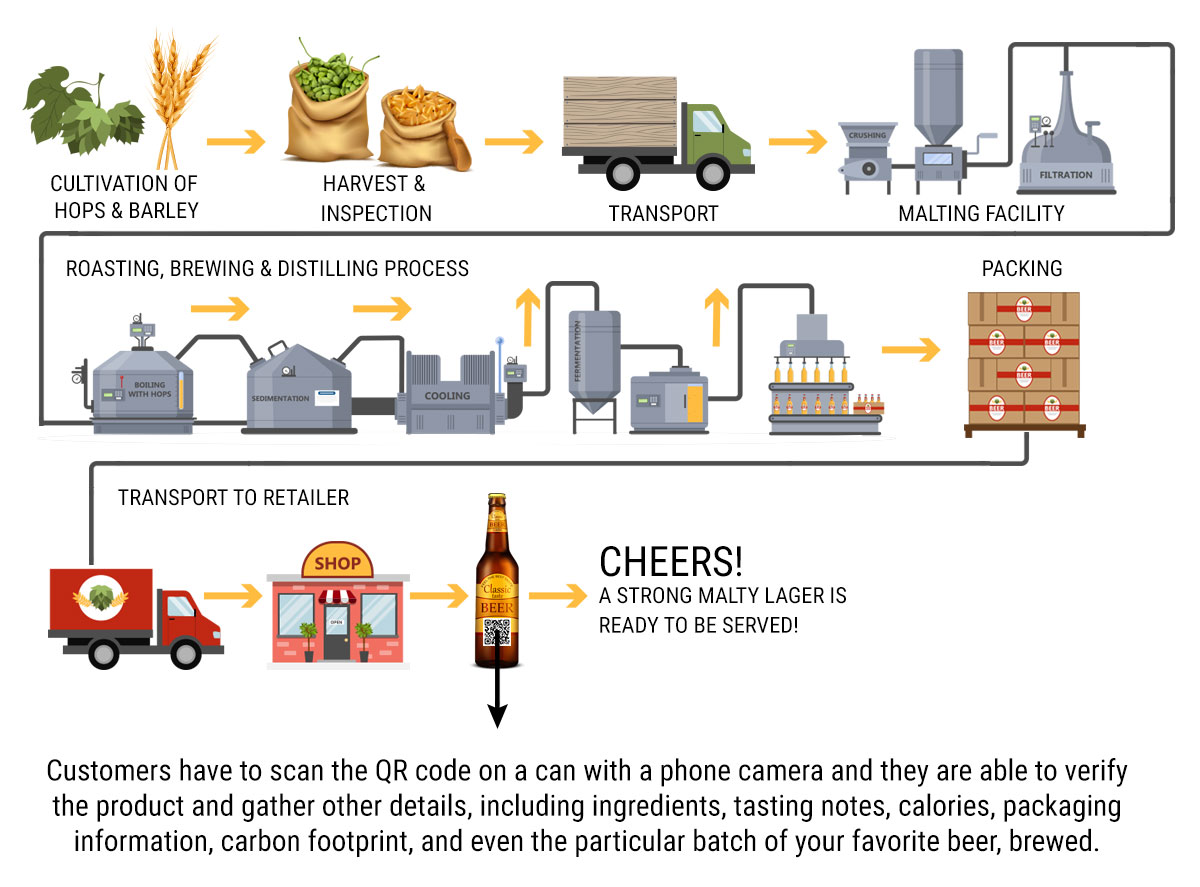 Shane McCarthy, the Founder and CEO of Ireland Craft Beverages says – “Customers are more mindful, owing to climate change responsibilities and, of course, the current pandemic. Both factors have driven them to be much more socially aware of where their food and drink comes from.”

He further mentioned: “Large fulfilment centers can have access to a master QR code that will verify tens of thousands of cans within one shipment, ensuring they are all accounted for and none have been fraudulently removed or damaged. It also holds large benefits for Government customs and excise duties – this is something we are looking to implement.”

Kombucha is a variety of Green Tea that was traditionally brewed at home from mushrooms. It is also called mushroom tea. While this was a home-brewed product, the commercial world has taken over the production for some time now. Commercially produced Kombucha tea also has flavoring like ginger, lime, blueberry, or turmeric to reduce the sourness in the Tea.

The growing demand for Kombucha has put a lot of strain on the farmers where they end up importing a lot of ingredients from overseas. Most farmers don’t earn a living wage and end up cutting corners to make ends meet.

Many times, the product turns out to be substandard due to poor living conditions, soil quality, and inorganic growing methods.

More and more Kombucha Tea companies are now calling for traceability to be employed right from farm to brewery to ensure that quality ingredients growing in the true organic way reach them. Traceability will also ease the pressure on farmers and force the middlemen to grow the raw materials in better conditions.

Be it food or a beverage, in the age of globalization, food traceability is a reliable option for Governments, manufacturers, and customers to truly know where the product is coming from.

Food traceability measures in the Beverage industry can avoid many health issues and also bring a better process to measure the quality of the products. It is also a great way for companies to establish their superiority in the market by proving the sanctity of their processes.

Food traceability is the future and the best way to gain customer confidence in a conflicted world. Very soon, we foresee food traceability in the form of smart contracts within smart devices (watch or phone) to automatically scan the product to verify its safety and other parameters chosen by producers to disclose.

Do you run a brewery or own a beverage brand? Talk to us today to see how we can help you forward and backwards trace the hops you are about to brew.