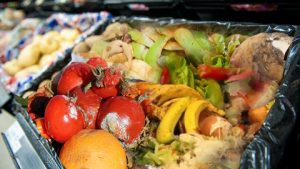 Can you imagine that a third of the food produced worldwide, or 1.3 billion metric tonnes, is thrown away – in a situation where one in three persons in the world are not getting the right food in the right quantity? If we could recover just a fourth of this wasted food, it could feed 870 million hungry people, according to the stats at the United Nations’ Food and Agricultural Organisation (FAO). Food production is also the single largest driver of climate change and environmental damage. When you dump a container of previous night’s leftover, you are not just throwing away food, but all the resources that went into producing it – effort, energy, water and fuel. Food waste translates into a huge amount of water wastage too. Agriculture accounts for 70% of the water used throughout the world. As much as 24% of it goes into the drain as food waste. Food waste that ends up in landfills generates a large amount of methane – a powerful greenhouse gas. According to a report, if food waste were a country, it would be the third largest greenhouse gas emitter – next to China and the United States.

Food waste happens at two levels – throughout the supply chain from production to consumption, and at the consumer level, when we leave dishes to rot in the fridge. Supply chain losses include loss due to problems in harvesting, storage and packing and the accidental dropping of a carton of perishable goods during transportation, etc. According to FAO, 54% of the world’s food wastage occurs during production, post-harvest handling and storage, while the rest happens at the processing, distribution and consumption stages.

It is in this context that business leader Vinita Bali, says that our food system needs a radical rethink. The primary challenge, she says, lies in finding the point of equilibrium in the trade-off between economic development, environmental conservation, and food supply and safety. Bali was earlier the CEO of Britannia Industries and is currently advisory board member or PwC India, among other companies. However, she believes that there are priorities that can change the current paradigm. Crop diversity and ensuring remunerative prices for the farmer is a step in this direction. Another issue is improving nutrition and minimizing the environmental footprint of the food system. This demands the food system to become more diverse, nutritious and sustainable. Of late, there has been emphasis on attracting investment in food processing, which can also help to stem the losses in the supply chain that currently wastes 30-40 per cent of the cereals, fruits and vegetables we grow in India.

Let’s first look at some ways to reduce food losses at the supply chain level, which ranges from making low cost capital investments, to considering the unintended impacts of their buying specifications. These are as follows:

A key rule is that even though the extent of losses is global, the solutions must be locally driven. Therefore best practices must be based on the area’s specific needs and challenges. Investment in local research is the answer to this issue. Some basic capital investments would help too, like sealed storage drums to reduce food losses – and these have already been deployed successfully in pilot cases by FAO in Afganistan and elsewhere. Then there are both basic and cutting edge agricultural technology tools to address food loss. The U.K. Government Office for Science suggests simple low cost technologies – mini combine harvesters, grain-drying equipment, and mechanical rice threshers, for example.

Capacity Building is another requirement. More and more companies are now finding ways to enhance capabilities of their suppliers. Mars, Pepsi Co, Starbucks and Walmart are among the companies that are using a mix of procurement incentives, financial resources, direct trainings and technological assistance to work with growers, thus increasing the quality and reliability of their production. Existing contractual arrangements between buyers and producers can also result in producers overplanting or leaving edible crops in the field. By adjusting contractual arrangements, such producer level losses could be cut. Further, by tapping into alternative markets such as food banks, farmers’ markets and online exchanges, new revenue can be generated for items that might not be on buyers’ lists. However, the most promising large scale opportunity in reducing food loss comes from public-private partnerships among government, non-profit organizations and businesses, that work by reducing or sharing cost barriers for companies to better utilize surplus supply.

At the consumer level, cultivating small, thoughtful habits can help reduce food waste. Some of them are 1. Make a grocery list while shopping and stick to it 2. Ensure that you consume the product before the expiry date. 3. Be careful how much you take on your plate. 4. Some fruits and vegetables that appear dented may not be rotten, so check it before discarding. 5. Always look for options to reuse or recycle food. 6. Donate excess food to those who can eat it. Each of us – right from farmers, food processors, retailers, and people involved in the storage and transportation of food, and consumers – should act responsibly to prevent food wastage.

There have been inspiring stories from across the world in this direction. France unanimously passed legislation in February 2016 prohibiting supermarkets from throwing away unused food. It became the first country to do so. It was made mandatory that super markets of a certain size donate unused food, failing which may require the markets to pay a fine. Other policies require schools to teach students about food sustainability, and companies to report food waste statistics in environmental reports. Again, in Coimbatore district of Tamil Nadu in India, a team of youngsters started the No Food Waste initiative. A team of volunteers collects surplus food from large scale events such as weddings and distributes them to nursing homes, orphanages and slums.

Globally, the number of people who depend on agriculture directly and indirectly is the largest of any sector and every single living being is a consumer. Thus, this sector also holds the greatest responsibility for the sustainability of the planet. Cutting food losses is one third of the problem solved.