Indian Agriculture Exports: The Way Ahead 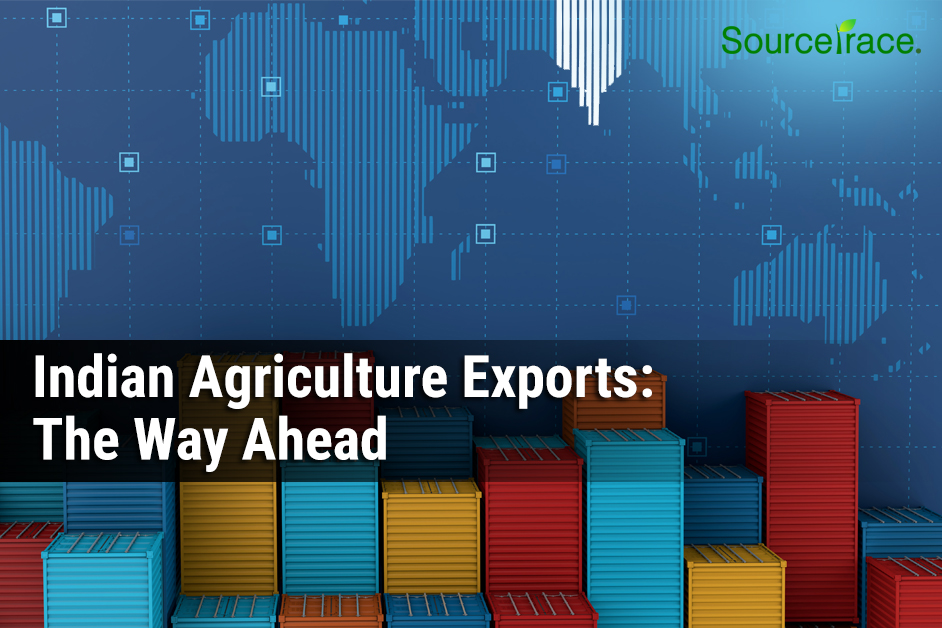 India’s agrarian culture and diverse climate types have made significant contributions to the global food basket. Mangoes, curries, snacks, and spices from India are famous all over the world. For a quick look at some data points, India leads the production of bananas, papayas, and mangoes in the world. It is also the largest milk producer and the largest producer of spices in the world. With regard to vegetable production, India stands second worldwide and tops the list for lady’s finger.

In India, the Agricultural and Processed Food Products Export Development Authority (APEDA) is mandated with the responsibility of export promotion and development of several scheduled products which range from meat and meat products, pickles, papads and chutneys, dairy products, to floriculture and its products, and even herbal and medicinal plants. In tapping India’s agricultural strengths and expanding the export potential of its food products, APEDA plays a critical role. The agri-export policy has been framed with a focus on agriculture export-oriented production, export promotion, better farmer realization and balancing out with the policies of the Government of India.

Agri-processing and agri exports attain importance as a key area especially because post-harvest losses in India are high, and range from 8-18%. The reasons include poor post-harvest management, absence of cold chain and processing facilities. Rather than allowing produce to go waste, having a well-planned export system will help cut down losses and at the same time, earn revenue for the country. Also, a farmer-centric approach is required for improved income through value addition at source itself so that losses across the value chain can be minimized.

It is heartening to note that India’s role in global export of agricultural products is on a growth path, and is ranked 10th amongst the major exporters globally as per WTO trade data for 2016.

Its share in global exports of agriculture products has increased from 1% a few years back to 2.2% in 2016. Also, with agricultural production increasing faster than growth in domestic demand, the surplus for export is experiencing higher growth. A comparative analysis of India’s 10-year exports indicates a growth of 9% between the years 2007 and 2016, faring much better than China (8%), Brazil (5.4%) and the U.S. (5.1%). During this period, exports of coffee, cereals and horticultural produce doubled, while exports of meat, fish and processed products grew between 3-5 times. And yet, Indian Agri exports are lower than countries like Thailand and Indonesia with much smaller arable land area.

Another change that agri-exports have undergone is related to the structural change within Indian agriculture itself. During the Green revolution era and until the 90’s, the growth has been cereal-centric, limited to wheat and rice.

But between the year 2000 and 2014, the country’s agri-production has been driven by high-value segments like horticulture, dairy, poultry and inland aquaculture. No other country has a more diverse food and non-food agriculture base as India, and there’s reason to be optimistic about India as a leading player in world agriculture trade.

Despite this leading position that Indian agri-exports has earned, its total global agricultural trade accounts for a little over 2% of world agricultural trade. The reason is the inward-looking policies that focus more on food security and price stabilization, and also because exports are in bulk, and comprise low-value and semi-processed items. Exporting its vast horticultural produce has proved difficult due to a lack of uniform quality, standardization, and its inability to curtail losses across the value chain.

Pesticide and chemical residues are another reason why Indian food exports are rejected, due to residues found that are higher than the Maximum Residue Limit (MRL) of importing nations. This includes several items from Basmati rice to grapes to peanuts. The lack of awareness among farmers regarding the appropriate amount and timely use of chemicals is a major obstacle.

Prime Minister Shri Narendra Modi’s vision to double farmers’ income by 2022 would require a series of interventions to improve production and productivity, better pricing for Agri produce while containing the cost of production. Within this ambit is a long-standing need for a dedicated agricultural export policy in India, which can stimulate the entire value chain from export-oriented farm production to processing and transport, infrastructure and market access. The vision of this policy is to harness the potential of Indian agriculture through sustainable policy instruments, to make India a global power in agriculture and to raise farmers’ income.

This vision underscores several specific objectives such as doubling the value of Agri exports, diversifying the export basket, spreading to more number of destinations and boosting export of high-value products. It also strives to double India’s share in world agri exports by integrating as early as possible with the global value chain. Ultimately, farmers should be able to get the benefit of export opportunities in the overseas market.

For a successful agricultural export policy, one critical aspect would be to have a robust infrastructure with storage and processing facilities, good roads and world-class exit point infrastructure at ports to enable swift trade.

The focus should also be on promotion of value-added, indigenous and tribal products. Marketing and branding of organic products and developing uniform quality and packaging standards for organic and ethnic products can also help. Moreover, it is important to promote R & D activities for new product development for upcoming markets, like fortification of food products.

Skill development for the agri-processing and marketing and promotion of “Brand India” are the other initiatives that can catapult Indian Agri exports further. Other shifts required include improving promotional efforts – for example, Krishi Vigyan Kendras can be engaged to take export-oriented technology to farmers and creating awareness among farmers about export opportunities. Farmer Producer Organisations are yet another institutional innovation that can help smallholder farmers overcome the limitation of scale and thus extend their reach to distant markets.