Getting More from Less: System of Rice Intensification

Membati, a 35 year old tribal farmer from Madhya Pradesh, India, has reason to cheer. This year the harvest from her two-acre plot is 17 quintals, where as for the last many years it had stagnated at around 4-5 quintals. Such an output became possible after she adopted the System of Rice Intensification (SRI) that was demonstrated by a local NGO. In fact, all farmers who adopted the method saw at least a 50 per cent increase in yield, raising the income levels and well-being of the village as a whole.

This technique, which evolved in Madagascar nearly 25 years ago, is still finding new takers, like Membati. In fact, it has picked up so much momentum over the years, that evidence shows more than 500,000 farmers in 20 countries are using it to increase the productivity of paddy. Apart from raising absolute yield, it also helps reduce external input costs. Empirical studies carried out on this technique reveals that it can save water by 25-50 per cent, seed input by 80-90 per cent, raising paddy output by at least 25-50 per cent or more.

It has a record of its productivity having been validated in 28 countries from Afghanistan to Cuba.

But how does this technique manage to achieve such an output? Well, SRI works by changing the way plants, soil, water and nutrients are managed and utilized in paddy production. For example, the seedlings are transplanted when still quite young, at the age of 8-12 days. The transplanting process is also both quick and careful, to minimize ‘transplanting shock’. It is transplanted on a widely spaced grid of 25 cm x 25 cm, to encourage better root and canopy growth. Apart from that, the soil in enriched by adding organic matter.

This helps it to hold more nutrients in the root zones, which can be released when the plants need them. During the growth period of seedlings, only a minimum amount of water is applied, and the field is allowed to dry before application of another layer of water. This way, when flooded conditions are avoided, it also prevents weed growth. All these methods contribute to increasing yield, and that is SRI. Although chemical fertilizers can be used, experience has shown that the best results come when soil is enriched organically.

As it is evident – this is an unusual innovation in many ways – it can raise the productivity of land, labour, water and capital investment, all at the same time. The only ‘cost’ involved is the farmers’ time and labour during the learning period; but with practice, labour too can be saved. 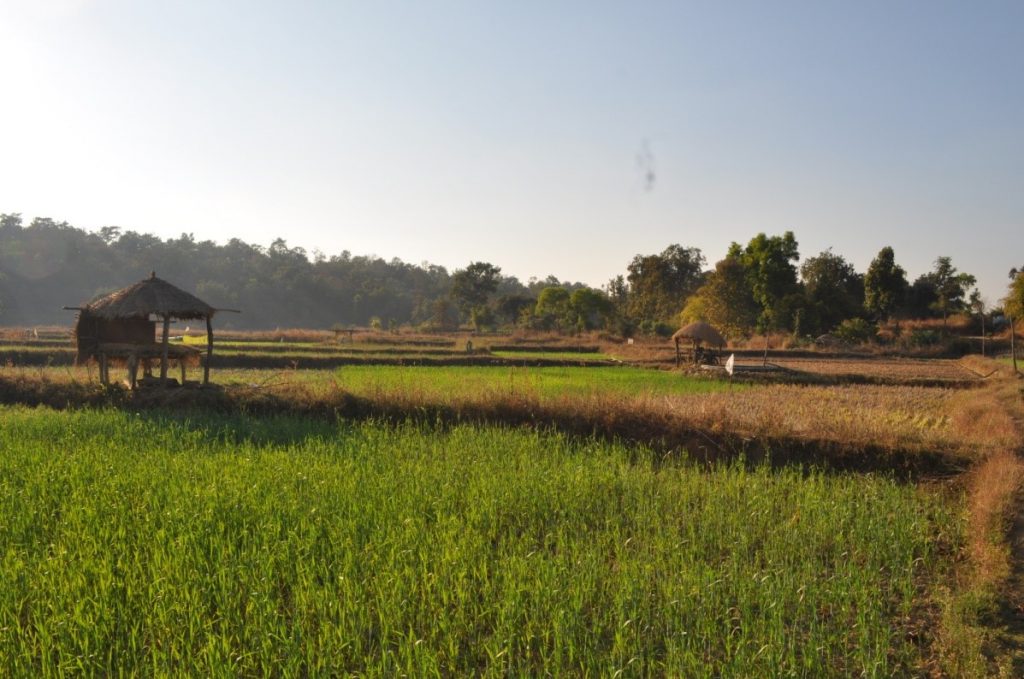 A paddy field in a village in Madhya Pradesh, India where farmers adopted SRI

Evolution and differences from agricultural innovations

SRI differs in many ways from other agricultural innovations. This is a case where farmers have voluntarily come forward to invest their time and resource. It has been spreading through civil society organizations and farmer-to-farmer extension. Unlike many other methods, this one did not come out of agricultural research laboratories, and did not take root from existing scientific models. In fact, it evolved out of necessity and through the dedicated work a Jesuit Priest, Father Henri de Laulanié, who spent 35 years of his life working with small holder farmers in Madagascar, looking for ways to raise paddy yields with the aim of reducing poverty and hunger.

Father Laulanié’s empirical work reveals that most of the practices that rice farmers have followed over centuries actually constrain productivity. For example, using older than younger seedlings, spacing closely, or flooding the field are all factors that limit the plant’s growth. So it’s not right to assume that over years of trial and error, farmers have necessarily worked out best practices.

Responses to SRI When an innovation does not arise out of a research laboratory or available scientific models, it is often met with indifference and opposition from the scientific community. And yet there are scientists who responded positively to this technique, all across from China to Gambia. These are scientists who were open to working with farmers and NGOs; and aware that the work in research stations is just not enough; and on-farm experience is as essential. From the farmer’s side, there was always a dire need to harvest more from less.

Even in its presentation, SRI is conceived not as a technology, but as a methodology based on a set of ideas that can be and is being translated into practice. It’s not so much as doing something new, as much as doing the same thing differently. And it enables smallholder farmers all over the world to get more from less. It’s proponents say that it’s still a work in progress, and is continuously being adapted for diverse environments.