Understand the Farm to Factory Model of the Potato Supply Chain 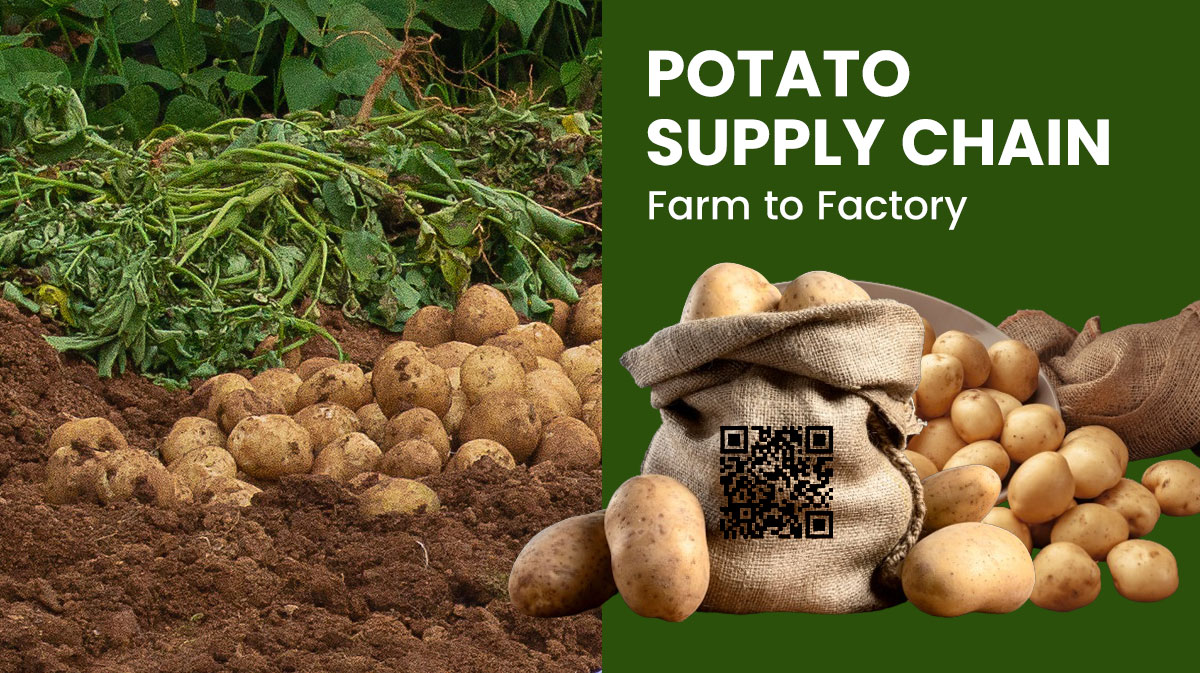 Potato Chips, Fries and Hash Browns are everyone’s favorite, let us get to know the industry in detail.

One of the most versatile food products- the humble potato. A staple in every culture, this produce dominates the frozen food, fast food, and snacks world.

In most cases, the potato changes so many forms across different handling stations that there is a great chance of the ball dropping somewhere. With a diverse and complex supply chain like this, food traceability initiatives for the potato supply chain are a top priority for organizations worldwide.

This will ensure that the customers and food companies can access the best quality, sustainable and ethically sourced potatoes in their chips, or fries and hash browns.

Potatoes are a highly popular and traded vegetable across the world. While the market witnessed stagnation between 2017-2018, it bounced back with a 6% increase in 2019. The billion-dollar industry is dominated by China, followed by India and Ukraine when it comes to production and consumption, as well. The US and Canada figure as no.5 and no.13 respectively on this list.

From 2019 and throughout the pandemic period, the demand for potatoes has constantly soared owing to its inexpensive, versatile nature for domestic consumers and its widespread usage in frozen foods and snacks for food processing/manufacturing companies and shelf life of the harvest by itself.

Commercially speaking, out of the many reasons for the growing demand for the humble potato, the primary or the soon-to-be most prominent reason is the demand from corporations in specialty foods such as canned foods, ready-to-cook frozen food varieties, fast food chains, and chips/snacks manufacturers.

Marketing and Production Contracts are widely used for potato farming across USA and India. This entails foreign varieties with higher yield being grown in fields which means that the locally grown varieties of crops and potatoes grown for self consumption by smallholder farmers is significantly reduced. The local varieties of potato that have provided nutrition and sustenance for centuries but now some part of the population suffers from malnutrition.

Under buyback contract farming, Large farmers get complete technical support from the private company which deputes field officers to inspect the potato fields fortnightly. Most of the companies provide their own seeds, machines, and technical know-how under contract farming, however, despite all support if the crop does not meet their standard requirements- the farmers stand to lose money.

The food processing companies choose potatoes, keeping in mind their end use and are categorized based on their starch content. The three basic groups are starchy, waxy, and medium or all-purpose. Some popular varieties are Yukon Gold and Katahdin potatoes for french fries, Russet potatoes that are high in starch are consumed as mashed potatoes.

Ever since an Idaho farmer interested in food processing convinced McDonald’s’ to use his frozen potatoes for their french fries, the world of fast food has never been the same. Today, most fast-food chains opt to source their meat and potatoes either canned, frozen, or pre-processed to make service easier.

As the fast-food culture grew, the demand for potatoes for these fast-food chains also grew multifold. In the United States, close to 40% of all potatoes went towards fast-food chain requirements and frozen food manufacturing.

The Rising Need For Traceability

When agriculture becomes demand-led, standardization and traceability become vital to ensure the quality and recall ability of the end product. Due to this reason, many food manufacturing companies and fast-food chains are entering direct supply agreements with farmers. For example, the Canadian frozen food company, McCain has tied up with UK farmers with royalties on produce for up to 5 years.

The traceability initiatives in the Potato Supply Chain tend to be driven by an incentive to standardize end products and manage the supply-side of the food chain effectively. Right from fast-food chains like McDonald’s, Canadian frozen food company McCain, and the popular chips’ manufacturer FritoLay, all major firms in the Potato Supply chain have shifted their focus and partnerships to farmers and potato growers who can support them with traceable solutions.

However, initiatives and solutions are coming from the supply end as well, independent of the end consumer. This is to have a stronghold in the market and clearly demonstrate the good agricultural practices(GAP certifications) undertaken by these potato growers.

Popular technological solutions in the traceability wing of the Potato Supply chain can be as simplistic as batch labeling and barcodes and go as complex as Blockchain, based on the size of the farm and the manufacturer’s choice.

One of the largest growers of demand-led potatoes or specially grown potatoes, the potato growers from Punjab, India, have implemented traceability solutions by collecting vital data at different points where the potatoes change hands at different stages of the supply chain for quality assurance.

Which Food Giants’ guarantee 100% Traceability in their Potatoes? 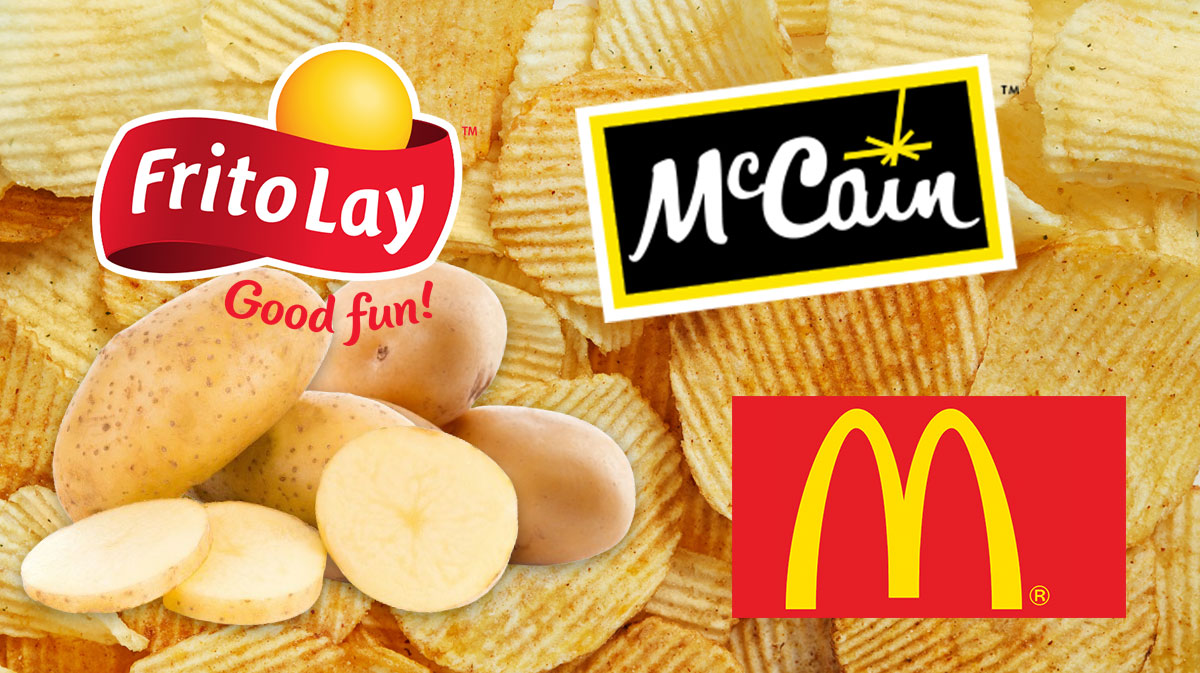 McCain, Canada-origin frozen food brand, has implemented a passport system for every potato in their production cycle to handle quality issues, traceability issues and also make product recall easier on a global scale. As a result, 93% of McCain’s global potato volume achieved the certification for Good Agricultural Practices in 2019.

The leading fast-food chain McDonald has also implemented a farm-to-table traceable solution for all the produce that comes to the stores from different farms. Each potato bag can now be tracked and traced at every point of the supply chain.

Frito-Lay tracks each critical farm production event of the supply chain:“The simple code on the potato bag can help us identify what day the chips were produced, when it was grown and the farmer who harvested it. We can tell food companies where the seed came from, what date we planted the potatoes, what kind of chemicals we used, when we harvested them, and when they went into storage,” says Paul Sproule, Sproule Farms, Grand Forks,North Dakota.

He also states that they use global G.A.P. certification to verify sustainable agricultural practices and access new territories, as they believe in complete traceability. So when there is a food recall, you can immediately trace it to the farm and hold that specific production line.

While most players in the Potato Supply chain are happy to go with traditional simplistic methods such as lot tracking, batch labeling, barcodes, and QR codes, etc., Blockchain is slowly proving its worth in the industry. 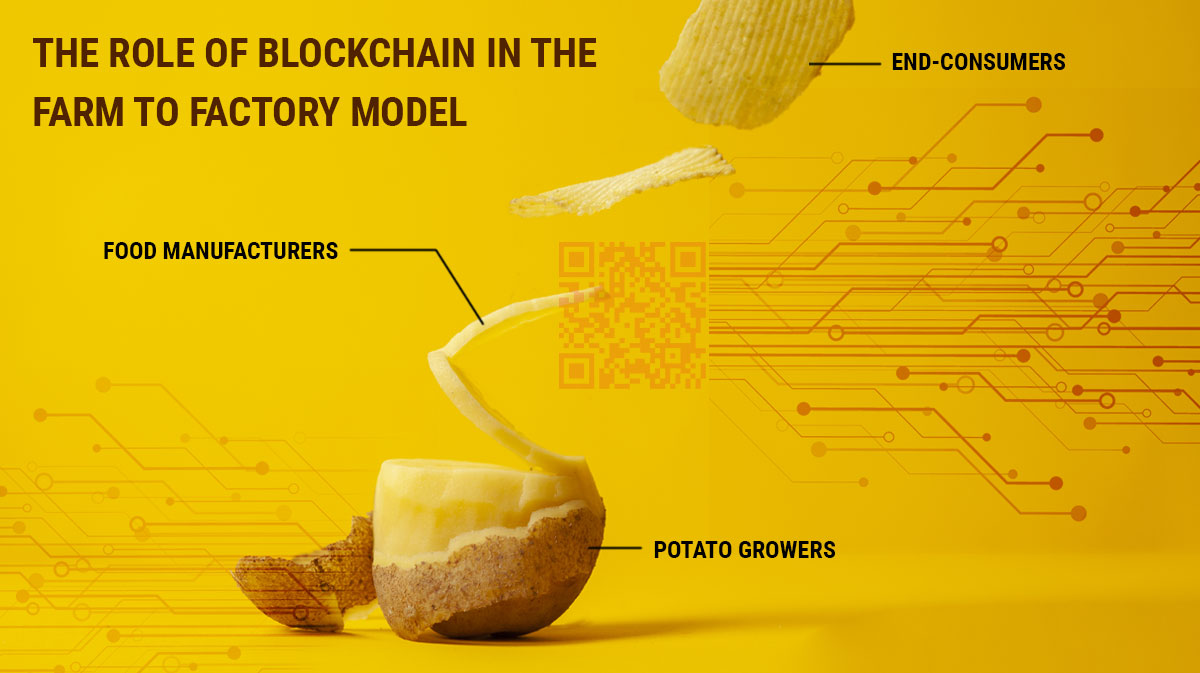 With Blockchain, potato growers, corporate food manufacturers and end-consumers can easily access information on the potato’s movement across the supply chain. A token that is followed from the first stage to the last to create a unique history for each produce, can be immensely useful for exporting farmers and companies that source potatoes from different sources.

If you are a frozen food manufacturer and you want your quality and reliability to stand out. Secure your product cycle with SourceTrace’s custom-designed traceability solutions and implement a robust farm to fork model.

Contact us for detailed information on Potato Traceability solutions.