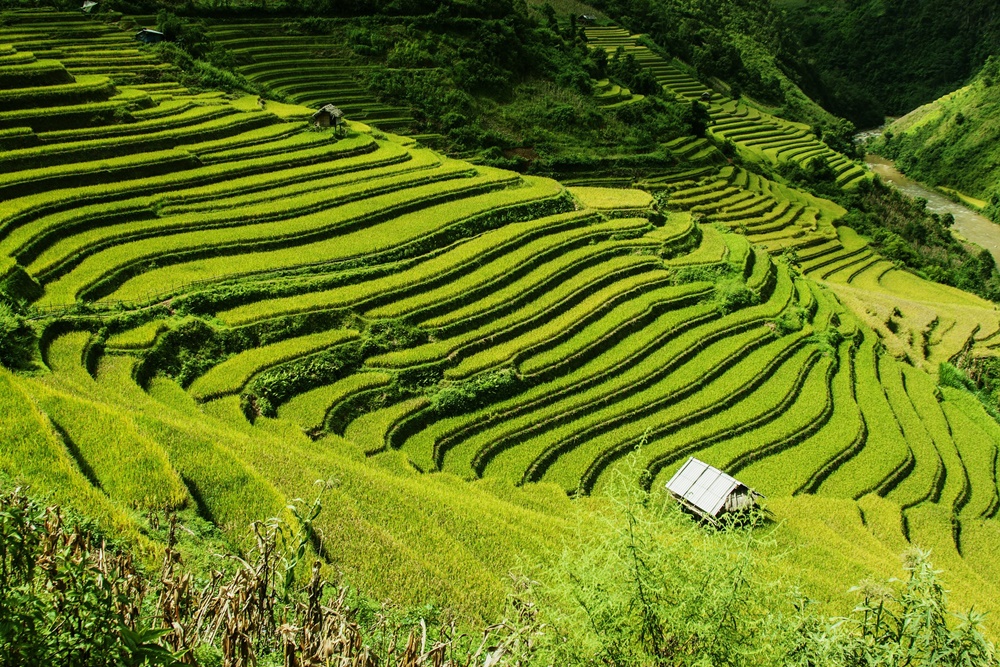 ‘Intensive agriculture’, or intensive farming, by its very term, is characterized by higher use of inputs such as capital and labour for every unit land area that is cultivated, and this way, it is designed to produce higher yields. By using smart farming system and techniques, intensive farming is able to produce higher yields and achieve economies of scale, and is thus synonymous with industrial agriculture.

Such industrial agriculture has been greatly supported through agricultural methods such as planting multiple crops a year, reducing the time period of leaving the land fallow, and increasing cultivars. (A cultivar is a plant or a group of plants selected for desirable characteristics that can be maintained through propagation, mostly produced by careful breeding).

Intensive farming also uses an increased amount of fertilisers and plant growth regulators, pesticides, mechanization and smart farming technologies. Most of the meat, dairy, eggs, fruits and vegetables in the supermarkets, at least of developed nations, come from such agriculture. Under such an industrial agricultural system, all agricultural operations require a thorough and detailed analysis of growing conditions, including weather, soil, water, weeds and pests. Data collection and analysis is also carried out on a widespread basis, and this calls for a user-friendly mobile technological applications.

The evolution of intensive agriculture

Let’s look at how agricultural systems evolved and led to a situation that created such varied use for mobile technological applications. Between the 16th and 19th centuries, agricultural and industrial development complemented each other. New agricultural techniques emerged – such as enclosure, mechanization, four-field crop rotation and selective breeding. These were important innovations that increased agricultural production and net output, and it freed up a significant percent of the workforce to contribute instead to the industrial revolution.

With the advent of the industrial revolution, industrial agriculture surged. What were the different ways in which mechanization changed agricultural processes? As a first innovation, the horse-drawn harvester revolutionized harvesting and inventions such as cotton gin reduced the cost of processing. Threshers and tractors replaced draft animals. All of these made it possible for individual farmers to manage large farms.

Further, scientific experiments in plant growth revealed that nitrogen, potassium and phosphorous were critical factors in plant growth; and this knowledge was used in the manufacture of synthetic fertilizers – further increasing crop yields. The chemicals left over after World War II was used to produce synthetic pesticides. But within a few years of use of synthetic fertilizers and pesticides, the first concerns of serious side effects such as soil compaction, soil erosion and health concerns about toxins entering the food supply also became exposed. This eventually led to the idea of smart farming system and sustainable agriculture.

Rather than focusing on N-P-K, or nitrogen, potassium and phosphorous, sustainable intensive agriculture identified carbon as a critical factor in plant growth – especially the carbon present in humus, the decomposing plant matter. Farmers who adopted this approach became known as humus farmers or organic farmers. This kind of agriculture became adoptable not just for large industrial farms, but also smallholder farmers who chose to practise intensive agriculture through the use of high inputs and labour, while also using sustainable intensive methods which are referred to as ‘appropriate technologies’. Although less widespread that large industrial farms, smallholder farmers too have their specific outlets to sell their produce, such as speciality farmer’s markets.

The strongest driver of specialized modern agricultural production however, is economics. But today, both the farming community and the general consumer is increasingly questioning this industrialised production technique and asking questions about how food is produced and whether they are sustainable into the future. ‘Sustainable agriculture’ is thus an emerging way of farming, and even though it is strongly associated with the organic sector, it is also a great deal more than that.

When an agricultural production system is sustainable, it is resilient, adaptable to change and does not deplete the resource base. So, the comprehensive term called ‘Sustainable integrated farming systems’ comprises many dimensions-organic production, vertically integrated business, supply chain management and brand building. In some countries, even organic production has moved on from a cottage industry to a highly industrialized one, leading the way in integrated agriculture with some excellent applications of smart learning technologies and learning opportunities for conventional production systems.

Throw in livestock-rearing to the already existing intensive farming systems, and you have intensive integrated agriculture or farming systems. Combining agriculture and livestock is seen to have multiple benefits. It is also an ideal system for smallholder farmers, as it is much more economical for farmers to raise animals in an integrated farm. The fodder comes from the farm and thus meets the energy needs of the animals.

The dung can also be used as fuel in biogas plants. Apart from providing dairy products, the animals are also efficient in recycling organic and crop residues from the farm. Such integrated farming systems, or at least multi-cropped ‘mixed’ farms was once the backbone of all agricultural production systems in the western world. But they gradually separated in the 20th century owing to specialization of production systems. Almost all arable land through North America and Europe is not intensively and exclusively cropped and livestock production is separated and intensified. This was motivated firstly by the economic efficiency of specialization and secondly the advent of cheap synthetic nitrogen fertilizer. No longer was cropping reliant on animals as a source of fertility. But, the question is, just because some things can be separated, should they be separated?

Despite the gradual investment in agriculture by corporate investors, farms remain predominantly family-owned-and-operated around the world. The farming systems that have been able to keep up with change are those who have moved beyond commodity production and are directly engaging with the market; considering that market share is a better driver of production than absolute yield of a commodity.

ICT in agriculture and Sourcetrace solutions

Regardless of the scale of farms – whether industrial or small, it is clear that today’s agriculture can gain immensely from information communication technologies. These include market information (including prices), trading facilities, weather information, peer-to-peer learning, data collection, financial services such as payments, loans and insurance.

Other than that, there are learning, advisory and extension services, there are geospatial applications that contribute to planning how land and water are used. These applications can also be used for operations monitoring, quality control and product tracking, apart from logistics and business processes. Sourcetrace solutions offers mobile applications such as farmers farm crop enrolment modules that captures multiple crop data at a single instant, and inspection modules to help monitor and manage smart farming systems for better control.